The Blog Search and Random Post Generator will appear here on the published site.
We found
results for you
We've got nothin'!

Inspirational Christian Stories and Bible Illustrations
for kids of all ages 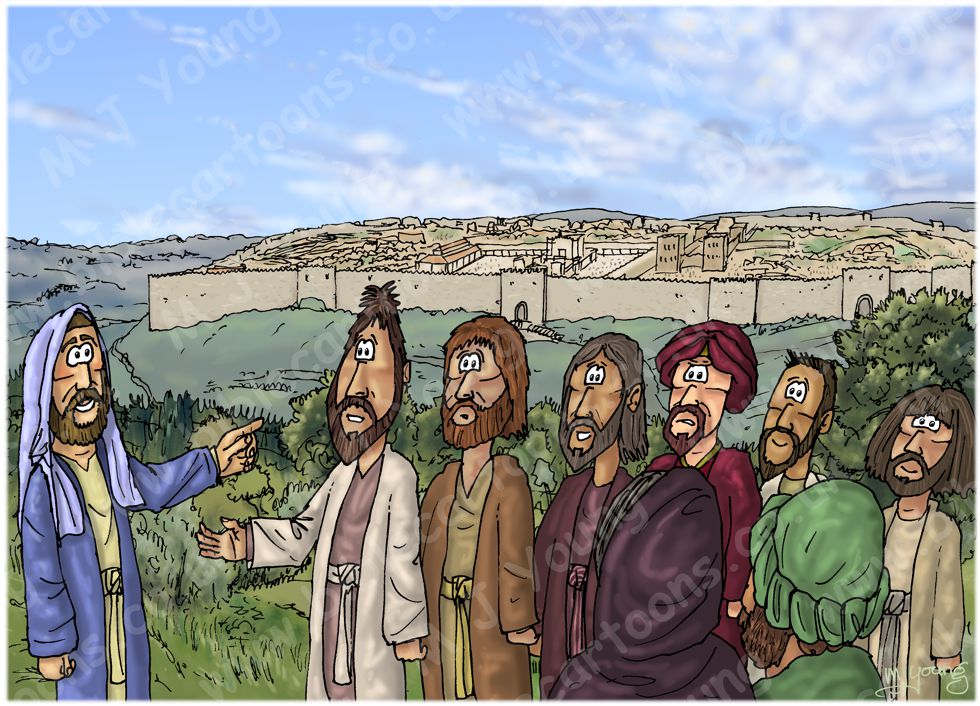 On the first day of the Feast of Unleavened Bread, the disciples came to Jesus and asked, “Where do you want us to make preparations for you to eat the Passover?”  He replied, “Go into the city to a certain man and tell him, ‘The Teacher says: My appointed time is near. I am going to celebrate the Passover with my disciples at your house’ “ (Matthew 26:17-18 ANIV).

Matthew 26:6 informs us that Jesus was in Bethany at the home of Simon, a man who had previously had leprosy. This scene is the day after, and shows Jesus & his disciples having walked the few miles from Bethany to Jerusalem, via the Mount of Olives. In fact, my scene above is a view from the Mount of Olives, looking westward towards Jerusalem. You can see the temple, with its high central building & surrounding courtyards, with the Fortress Antonia to the right of its outer walls. The fortress had 4 square towers at each corner. There are numerous houses and other buildings inside the walls of the city. 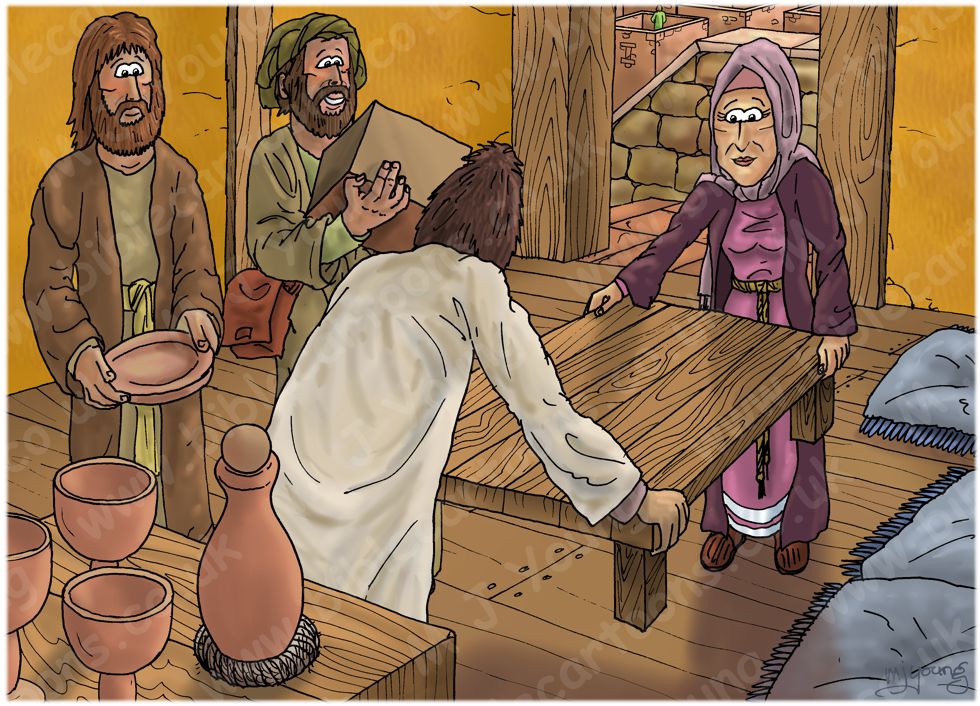 ​Although Matthew’s gospel doesn’t tell us exactly who the disciples were who asked Jesus where he wanted them to make preparations for Jesus to eat the Passover, Luke 28:8 informs us that it was Simon/Peter & John (son of Zebedee; brother of James) who were the two disciples sent into the city of Jerusalem to prepare the Passover meal/the Lord’s supper. For this reason I have drawn these two men in my scene. I wondered if anyone else would have helped these two men, so I have added two more people who are helping them prepare the upper room for the celebration. Perhaps these are disciples of Jesus, or else servants of the house owner.

Through the doorway you can see tiled steps leading down to the ground floor, and beyond that, there are some house tops & the city walls of Jerusalem in the distance.

In Biblical times people gathered round low tables & reclined (see verse 20 in the next picture), probably lying on big floor cushions. That’s why the table Simon/Peter & the lady helper are moving has such short legs on it. Also notice the three blue cushions (with blue tassels on their edges) already on the floor, which further suggests the reclined mode of feasting & celebrating conducted in Biblical times. 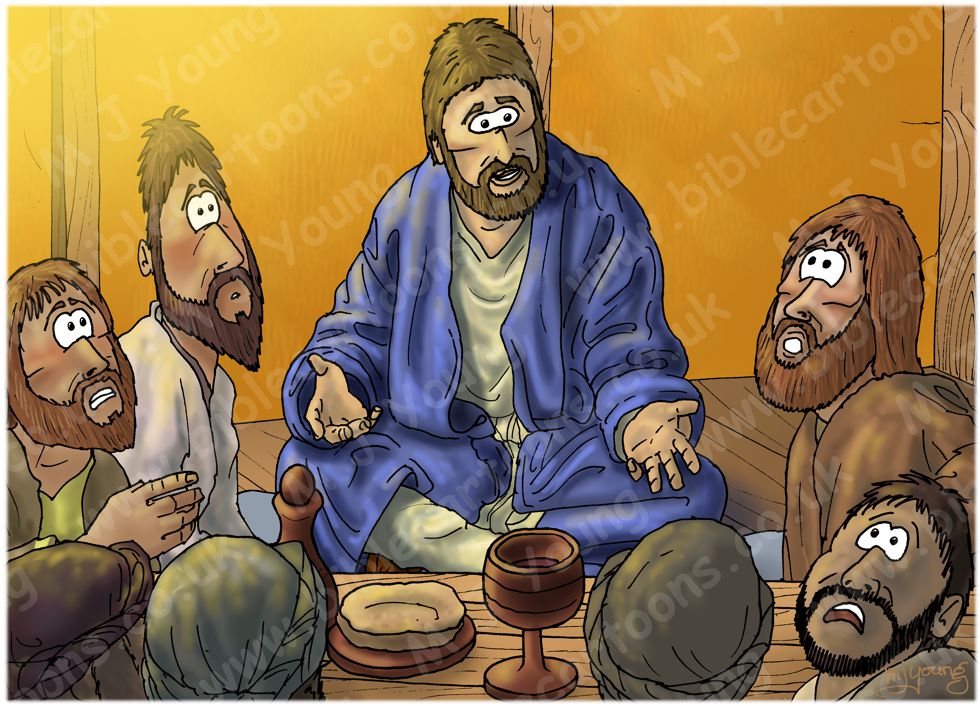 When evening came, Jesus was reclining at the table with the Twelve. And while they were eating, he said, “I tell you the truth, one of you will betray me” (Matthew 26:20-24 ANIV).
They were very sad and began to say to him one after the other, “Surely not I, Lord?”
Jesus replied, “The one who has dipped his hand into the bowl with me will betray me. The Son of Man will go just as it is written about him. But woe to that man who betrays the Son of Man! It would be better for him if he had not been born.”
From left to right, back row: James (son of Zebedee and brother of John), Simon/Peter, Jesus, John (son of Zebedee and brother of James).
In the front row, from left to right (mostly with their backs to us): Matthew/Levi the tax collector, Thomas/Didymus (”doubting Thomas”), James/Cleopas (son of Alphaeus), Bartholomew/Nathaniel.

​This scene shows Jesus (in the centre of the picture) sitting cross legged on a cushion, explaining to his closest disciples that he will soon be betrayed. We have the historical advantage of knowing who that will be, but at this point the disciples didn’t know it would be Judas Iscariot.

This scene takes place in an upper room, somewhere in the city of Jerusalem. Notice that I have included a red curtain, drawn across the opening to the room, which would provide some draught protection for Jesus & his followers. 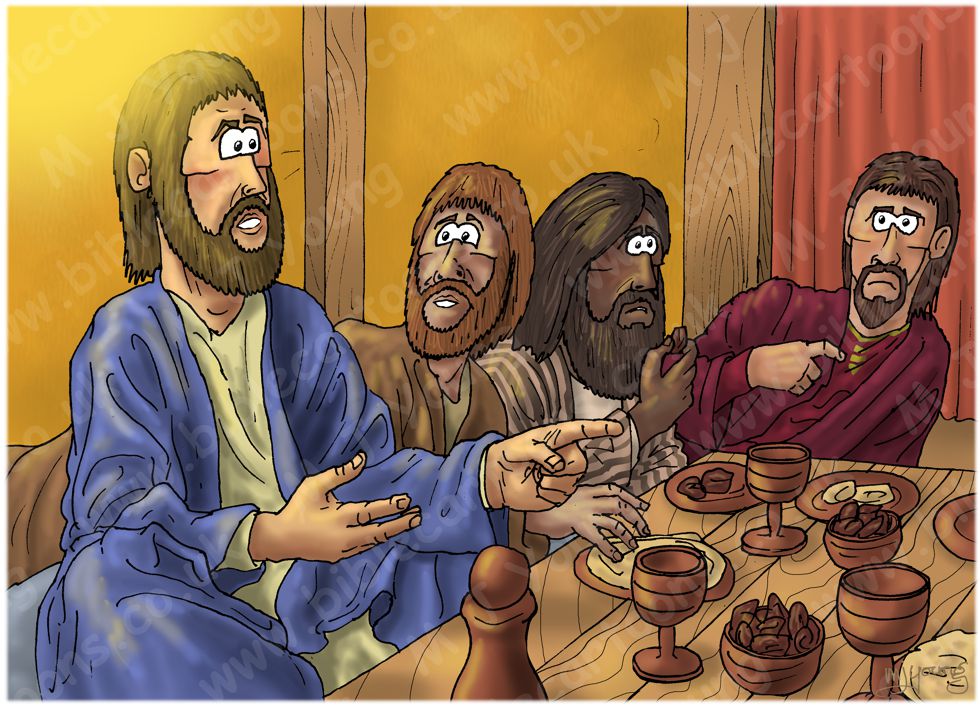 Then Judas [Iscariot], the one who would betray him, said, “Surely not I, Rabbi?”
Jesus answered, “Yes, it is you.” Or, “You yourself have said it” (Matthew 26:25 ANIV).
An oil lamp (above the characters & out of view) provides a warm yellow glow that illuminates this scene.
From left to right, back row: Jesus, John (son of Zebedee and brother of James), Thaddeus/Judas (son of James), Judas Iscariot.

This picture shows Jesus sitting cross legged at the low table in the upper room, agreeing with Judas that he will be Jesus’ betrayer. 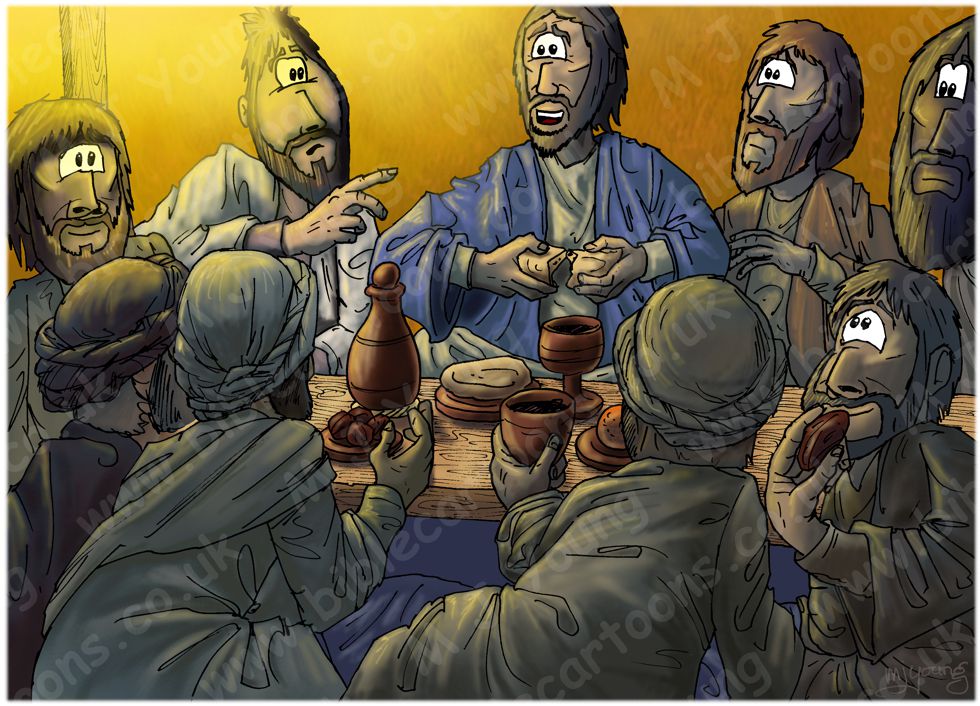 While they were eating, Jesus took bread, gave thanks and broke it, and gave it to his disciples, saying, “Take and eat; this is my body” (Matthew 26:26 ANIV).
An oil lamp (above the characters & out of view) provides a warm yellow glow that illuminates this scene.
In the back row, from left to right: James (son of Zebedee), Simon/Peter, Jesus the Christ, John (son of Zebedee and brother of James), Thaddaeus/Judas (son of James).
In the front row, from left to right & with their backs to us: Matthew/Levi the tax collector, Thomas/Didymus (”doubting Thomas”), James/Cleopas (son of Alphaeus), Bartholomew/Nathaniel.

The complete list of the 12 apostles can be found in Matthew 10:2-4 (ANIV) which reads:
‘These are the names of the twelve apostles: first, Simon (who is called Peter) and his brother Andrew; James son of Zebedee, and his brother John; Philip and Bartholomew; Thomas and Matthew the tax collector; James son of Alphaeus, and Thaddaeus; Simon the Zealot and Judas Iscariot, who betrayed him.’ 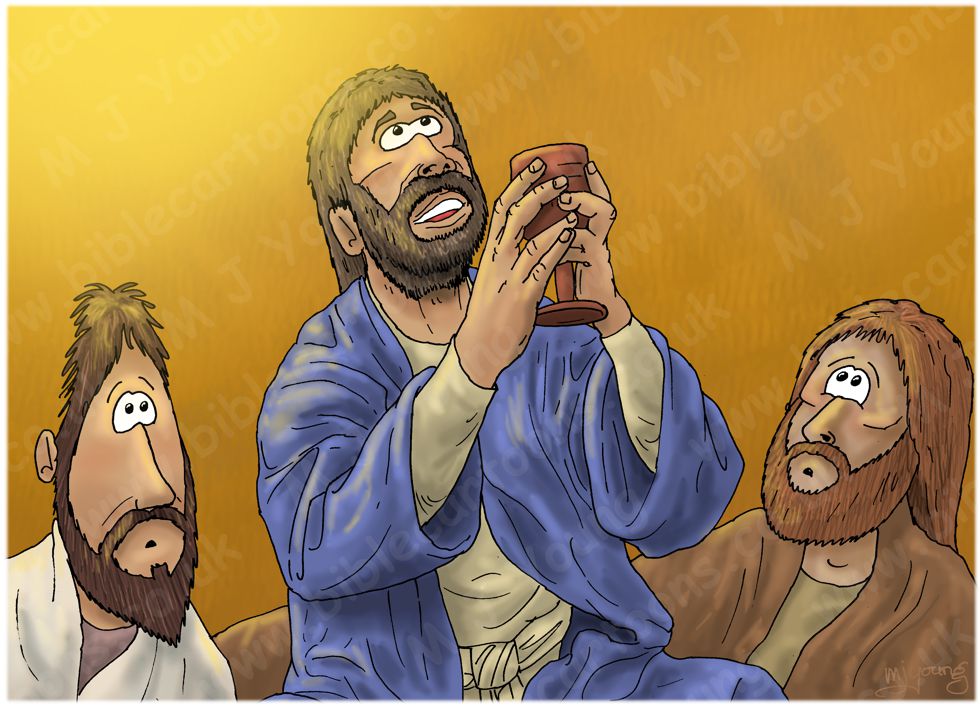 Then he [Jesus] took the cup, gave thanks and offered it to them [the disciples], saying, “Drink from it, all of you. This is my blood of the [1] covenant, which is poured out for many for the forgiveness of sins. I tell you, I will not drink of this fruit of the vine from now on until that day when I drink it anew with you in my Father’s kingdom” (Matthew 26:27-29 ANIV).
An oil lamp (above the characters & out of view) provides a warm yellow glow that illuminates this scene.
From left to right: Simon/Peter, Jesus the Christ, John (son of Zebedee and brother of James).

This picture shows Jesus sitting at the low table, holding up the cup of wine & giving thanks to God the Father in heaven. To his right (the viewers left) is Simon/Peter, while John (son of Zebedee and brother of James) is on his left (the viewers right). 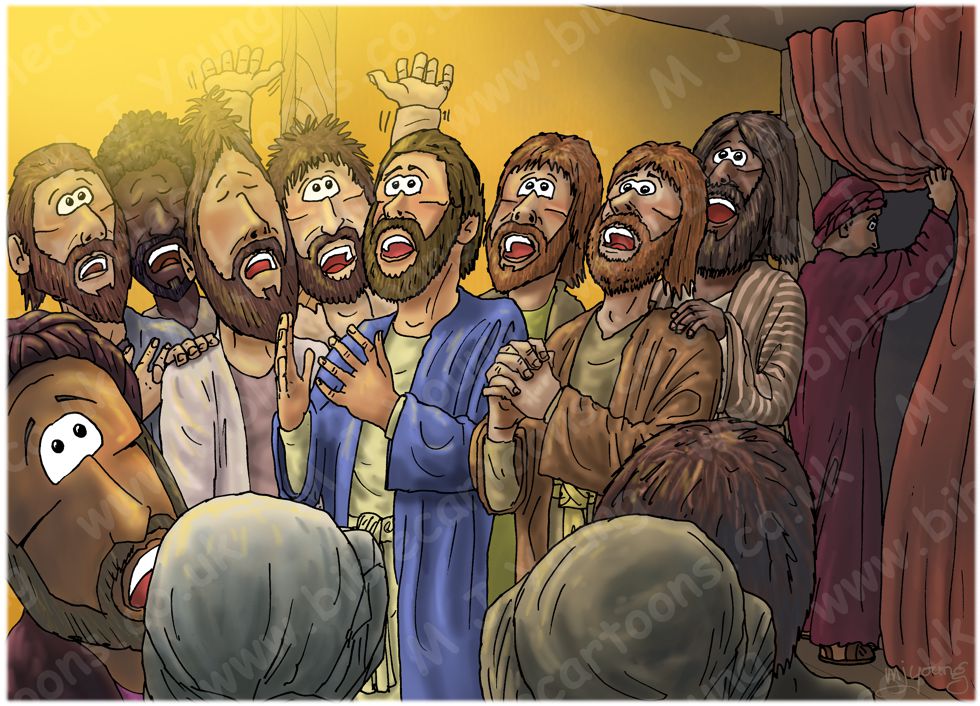 When they had sung a hymn, they went out to the Mount of Olives (Matthew 26:30 ANIV).
An oil lamp (above the characters & out of view) provides a warm yellow glow that illuminates this scene.
From left to right (back row): Andrew, Philip, Simon/Peter, Simon the zealot, Jesus, James (son of Zebedee), John (son of Zebedee), Thaddeus/Judas (son of James), Judas Iscariot (pulling door curtain aside & leaving the upper room).
In the front row, from left to right: Matthew/Levi the tax collector, with their backs to the viewer: Thomas/Didymus (”doubting Thomas”), James/Cleopas (son of Alphaeus), Bartholomew/Nathaniel.

This is the final scene in the narrative of the Lord’s Supper. The picture shows Jesus & 11 of his closest disciples/apostles singing together. Shortly after this they all left to go to the Mount of Olives, which was out of one of the east gates of the city of Jerusalem, and up a hill side, from which there is a good view of the city.

Notice that I have drawn Judas Iscariot pulling aside the door curtain & going outside. I deliberately showed him leaving the group early, & heading out into the darkness… both physically, & metaphorically! Matthew’s gospel doesn’t record his leaving the group as shown, but only John’s gospel (John 13:30) actually tells us this.
Text and Illustrations by Martin Young, Northamptonshire, England - https://www.facebook.com/martin.biblecartoons​ - reproduced by kind permission:
The Crucifixion